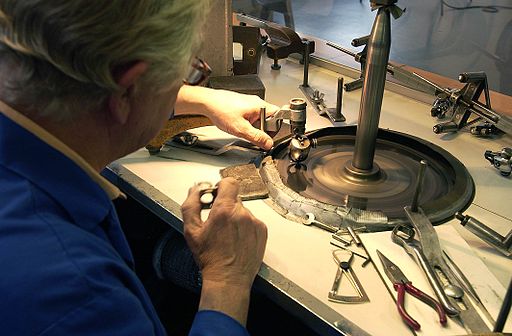 Be sure to check out our loose diamond page to compare actual prices.

Diamonds, the strongest objects in the world are carved intricately by masterminds from centuries ago. It is quite amazing how humans vulnerable to the slightest increase in heat can tame the fiery diamonds bathing in the volcanic lava for centuries. Besides taming, they create amazing shapes and cuts transforming this rock into the shiniest, most precious object of the world. It takes ample skill and patience for a person to make that perfect cut in the valuable diamonds making them suitable to be placed in various jewels. The world has seen several master diamond cutters. Let us explore about the life and works of the 5 prominent diamond cutters this century had seen

Brian Gavin who hailed from South Africa is a fifth-generation diamond cutter. He created the perfect hearts and arrows diamond cut in 1997. Brian's father Ben Gavin was a master diamond cutter too. Brian started learning the trade from a very young age. Brian is known to work with his diamond for hours together. In addition to creating the perfect hearts and arrows cut he created a grading system which will analyze the heart and diamond cuts created by other artists. His grading system followed widely in the diamond industry from 2004 is considered as the standard of hearts and arrows cut. This cut brings out the shine and fiery nature of the round cut diamonds like no other cut invented previously. It had become a great alternative to the traditional hearts on fire diamond cut. It is now the most preferred cut for diamond marriage rings and studs.

Kaplan is best known for creating 13 pieces out of the Jonker diamond. Lazare Kaplan was born in Russia and brought up in Belgium. He entered his family business when he was just 13 becoming an apprentice in his uncle's factory, then famous for cutting diamonds. By 20, he had mastered the art of creating amazing cuts out of irregular diamonds. He started his own business and became famous quickly catering several royalties. His life took a great turn, when Germany captured Belgium. Luckily Kaplan and his family were in the US then. Kaplan was forced to restart a new life in Manhattan and he presumed his old glory within a short period.

Great imagination, a relentless mind which never ceased from experimenting and great persuasion skills which often made the diamond owners compromise on the extra lost carats for great design were his greatest skills. He became quite popular for his "Oval Elegance" cut. Kaplan's business prospered in the US till the 1929 stock market crash. He was left to rebuild his life from the scratch for the second time. He borrowed $300 from his son Leo's savings and resumed his business again. He rose to unmatched fame when he was assigned the job to cut the Jonker diamond. It is said Kaplan missed a major cut which would have totally spoiled the diamond narrowly. He cut the huge Jonker diamond into amazing pieces fit for being fixed in the jewelry.

Marcel Tolkowsky was Kaplan's cousin. He observed the work of Kaplan from a young age. Basically a mathematician, he perfected Kaplan's way of cutting diamond and created a formula for creating "ideal cut diamonds." Marcel's ideal cut diamonds was known to show 58 facets, 33 on the crown and 25 on the pavilion. When Kaplan's business was at its peak and they could not find enough skilled labors in the US, they brought in people from Puerto Rico. This formula was developed to teach them how to cut diamond's the Kaplan way. The round brilliant diamond cut made famous by Marcel is said to have revolutionized the industry paving way for machine cut diamonds which relied on his formula. Marcel did a PhD thesis on how various cuts will maximize diamond reflection. He perfected the art of cutting diamonds to such an extent there was a formula suitable for every type of diamond. He was a long time member of the Diamond Dealers club of America and the Diamond Trading and Precious Stones Association.

Joseph Asscher, became famous of cutting the Cullian diamond. The Cullian diamond which was the largest diamond in the world was cut to several parts which decorate the crown jewels of the England aristocracy. Legend says it Asscher attempted to cut the Cullian in front of a huge mob. But, he failed in the attempt as the blade broke. Later he created amazing cleavages in it when he worked in solitude with just the notary monitoring him. Joseph and his brother Abraham together founded the Assher Diamond Company. They created their famous "Asscher Cut" in 1902. Like most of the great European businessmen who lived in the first 5 decades of this century, the Asscher's family was torn apart during the World War II. Only 10 of the family members survived and they strived hard to recreate the company in an industry with visibly no future. Today, the “Royal Asscher Diamond Company” is one of the greatest names in the industry. The Asscher cut revealing layers of narrower steps and great depth still remain matchless in the diamond industry.

The nephew of Marcel Talokowsky Gabriel S. Gabi, shortly known as Gabi Talkowsky was born on 1939. Gabi Tolkowsky is known for cutting the famous Centenary Diamond. He became the advisor in De Beers group. He was assigned the job of cutting the Golden Jubilee Diamond which was presented to the King of Thailand. Gabi became very famous for creating flower cut diamonds which were simple, yet quite elegant. The crown jewel of Gabi's cut is the Gabrielle diamonds. Renowned as the world's first triple brilliant cut diamond, this round cut consists of 105 facets in total sparkling from all angles taking diamond cut to brand new level. His works rightly earned him the name "father of the modern round brilliant diamond cut". De Beers group registered several patents with the exclusive designs he created for them.

In the years between 1813 and 1845 the Amsterdam diamond industry changed from a house-industry to a factory industry. Next to the firm of Coster in 1845 all other producers joined in the “Diamant Slijperij Maatschappij”, a company with 2 factories (of about 400 mills each), were participants could/had to hire a mill (in 1896, there were about 6.500 mills in Amsterdam). After a while, and certainly during the Cape period (1871 - 1876) new companies were shaped. Names as Boas, Bottenheim, Friedmann&Co and others got famous in this early period. In about 1875 Jacques Samuel Metz (1847 – 1901) and his brother in law Levy Barent Citroen went into the business of cleaving and cutting diamonds. At 1881 they had build a new, highly sophisticated factory at the Rapenburgerstraat 53-61 in Amsterdam (168 mills). It was in this factory that many of the large stones found before about 1900 were cleaved and cut. Of course it is in fact unknown what was found worldwide, and who processed them. But in this factory the largest one of those years were cut: the Imperial (1884, also named the Victoria, the Jacob, or the Great White, cut 184,5 carat), the Jubilee (1896, also named the – President- Reyts, cut 245,35 carat), a rough 400 carat yellow stone (probably the De Beers, cut 234,5 carat), and stones of 138, 109,25; 133, 273 carat, and many more. Het Weekblad van de ANDB (the weekly of the Dutch diamond workers association) says in 1907, at the 70th birthday of the cutter “some more or less, it does not matter, because it is clear that this cutter will be the only person who cut such a huge amount of large stones”. The name of the cutter who did all this work was Moses Barend Barends (1837 – 1911). After he stopped working (around 1900) and after the death of Jacq. Metz (1901) the firm still existed for some years but never florished again. After this period the Assher firm rose from hiring a part of the Bottenheim factory to owners of a large and modern factory, in which many of the important stones of their period were processed. Inevitebly much of the Amsterdam diamond activities were moved to Antwerp, probably because of a (for the producers) better labour climate. Around 1920 Antwerp outnumbered Amsterdam in amount of diamond workers and mills.