IGI is Improving but is still not on par with GIA!

The Gemological Institute of America (GIA) is one of the  best grading labs in the world. It is often consistent in grading diamonds and is a standard-bearer for diamond certification and grading in the diamond industry.

The International Gemological Institute (IGI) is also a vast institution and has been around since 1975.

While both the  GIA and the IGI are reputable labs, there are noticeable differences in grading diamonds.

In a nutshell, the IGI is not as consistent or strict in grading diamonds as the GIA. Therefore, if you are considering an IGI graded diamond, read our tips below carefully to avoid making obvious mistakes and know what you are in for.

The reports issued by the IGI for lab-grown diamonds are stricter and more accurate than their reports for naturally mined ones.

GIA and IGI: Who are they?

The Gemological Institution of America was founded in 1931 as a non-profit institution dedicated to researching, educating, and grading natural gemstones. It wanted to develop a standard so that everyone in the industry could use a unified and standard methodology for grading diamonds and other gemstones.

As a result of their dedication and hard work, the GIA introduced the International Diamond Grading System (also known as the  4Cs – cut, clarity, color, and carat weight) in 1953. Today, this system is used by everyone, including the IGI.

The GIA also trains gemologists and has 11 campuses. Moreover, they have 9 laboratories and 4 research centers across 13 countries.

The International Gemological Institute is the largest independent gem lab in the world. It is headquartered in the heart of the diamond trade, Antwerp, where De Beers also has major operations. The company also has offices in several diamond centers worldwide, such as New York, New Delhi, Surat, Hong Kong, Dubai, Shanghai, and Tel Aviv, among others.

The IGI, which has more than 650 gemologists and professionals working in the jewelry business, has been trying to make itself a well-known diamond grading lab.

What is the main difference between IGI and GIA?

In Europe and Asia, IGI's grading reports are widespread. However, the GIA has been gaining more market share there in recent years. In the United States, the GIA is by far the first go-to lab.

In our opinion, the IGI is not as strict as the GIA when grading diamonds, but it does not mean that you should entirely rule them out. As explained below, as long as you make an informed decision, you will still get a decent diamond for your money. Here is what to expect. The Difference between IGI and GIA in grading the 4Cs:

Because the IGI is loosely structured globally, slight inconsistencies among its labs may exist, depending on their location.

Be very clear with the retailer and ask questions about the clarity of SI1 and SI2 IGI graded diamonds as they might not be eye-clean. Please ensure that low clarity grade IGI diamonds are eye clean with no obvious noticeable inclusions.

On the bright side, around 10-20% of IGI graded diamonds might be consistent with how the GIA would grade them. How? Human beings grade diamonds; individual gemologists grade and then cross-examine them. Therefore, some gemologists in the IGI may be as strict as those in the GIA. The problem is that they do not have the same consistency in grading diamonds across the organization as the GIA.

The moral of the story is that, unless it is an excellent deal, you are probably not getting a reasonable price on an IGI-graded diamond --- it is just graded higher than it would be in a GIA report.

Think about it; every dealer knows that they would get a better price for a GIA graded diamond (if it is a high-quality stone, as the report says it is) and that it would also sell fast. So, what is their incentive to grade the diamond by the IGI? Deep down, they know that it is more lenient than the GIA and would give more favorable results.

Types of reports to look for while buying IGI and GIA graded diamonds:

Unlike GIA dossiers with sufficient information on them, IGI's mini grading reports, often issued to vendors in shopping malls, are notoriously limited in their facts, especially about the cut of a diamond.

If you are buying an IGI graded diamond, make sure you buy a diamond with a full IGI report issued by one of their well-established labs in the U.S. or Antwerp. 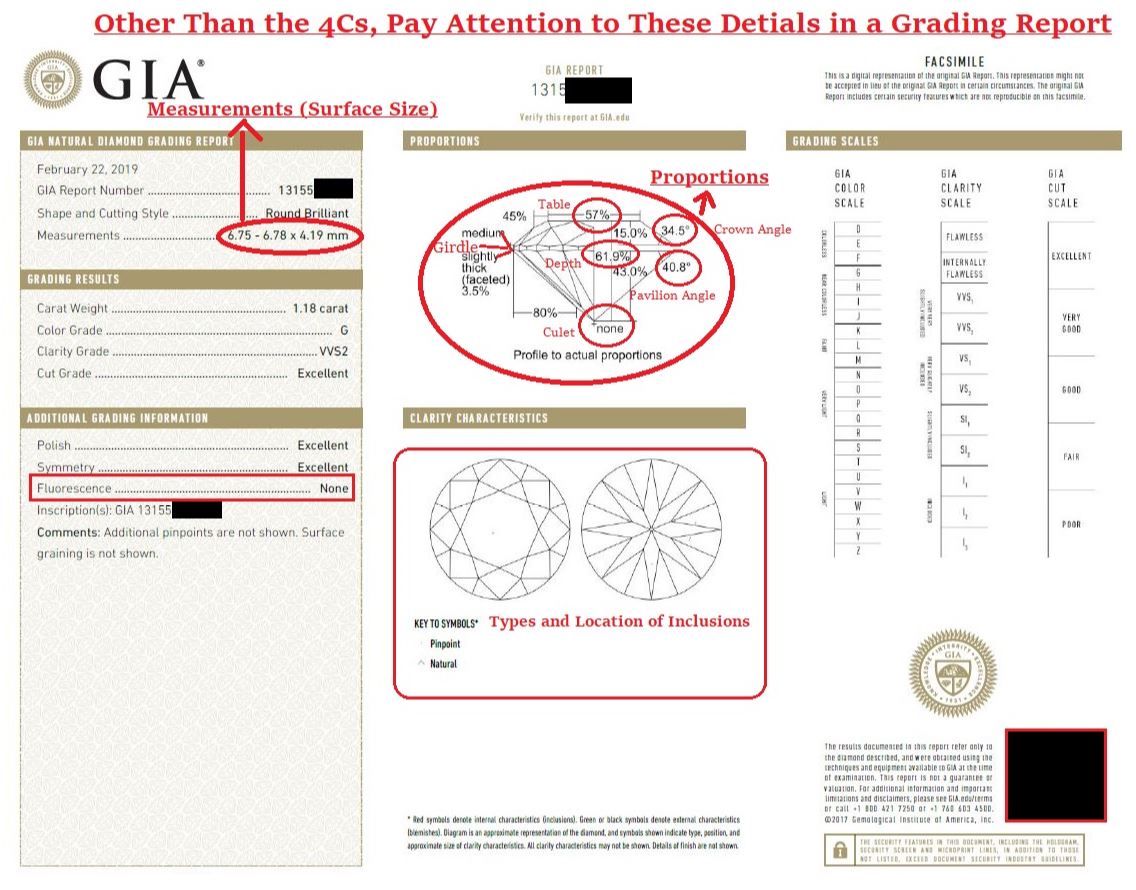 While the IGI is a reliable lab, it is still not as strong as the GIA, though you must not entirely rule out the former. Instead, please work with the assumption that there might be a slight inconsistency between IGI and GIA when it comes to diamond clarity and color.

When buying IGI graded diamonds, buy ones with a full IGI report, not the mini-reports, as they do not have any information related to cut. Moreover, purchasing an IGI diamond with lab reports from their more established labs in the U.S. and Europe might be a good idea. It is also important to note that the IGI is not as inconsistent with low-grade diamonds as with high grade diamonds.

Our best advice would be to go for a  GIA certified diamond and avoid the risk altogether if you are a first-time buyer.

As you shop for a perfect diamond, we also suggest that you familiarize yourself with the  seven factors that affect the price of a diamond and the four scenarios that buyers consider while shopping.

Finally, here is a list of our  top websites for buying diamonds or engagement rings online. Example of a Mini IGI Report